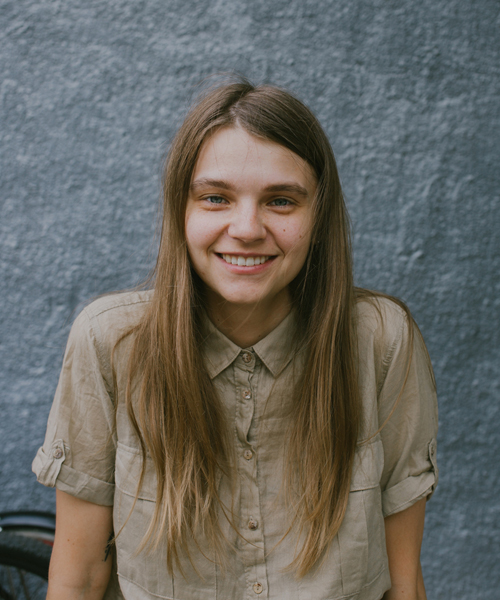 Daria Sazanovich who works by nickname Sheeborshee is an artist, illustrator, and designer based in Minsk. Since 2015 she productively cooperates with 34mag.net, batenka.ru, several NGOs and activist’s campaigns in Belarus and Kazakhstan. We asked Daria why it’s necessary to resort to means of visual communication while talking about human rights. She also gave a piece of advice to NGOs that want to cooperate with illustrators in their future projects.

– Tell us, please, how you started to cooperate with the civil sector.

– While studying design at university, I was working actively and by the time I received the diploma I had already been quite experienced. However, I had been working only in advertising and hadn’t known anything about the civil sector. As well as I hadn’t realized that design did not have to be advertising. I really hadn’t been enjoying what I’d been doing. It had seemed meaningless to me. In advertising we make everything beautiful and cool, but what's the point? And then I got to 34mag.net, quite a unique media that associates with activism. Afterwards I got acquainted with the world of civil initiatives. I have realized that a designer can work in this area and even earn some money. So I started to make illustrations for the media often drawing for webzines like Batenka for free. And then I began to connect with NGOs, initiatives, civil campaigns.

– Which of these projects has become the most significant for you?

– I have done one project for Kazakhstan called “Khabarstan” at the residence at the Prague Civil Center in collaboration with lawyers from Astana who are engaged in monitoring of the public procurement in Kazakhstan. For five years they had been monitoring how much money were spent on state funding of the media and wanted to present their report to the general public. They had some data in the form of numbers and graphics which is generally uninteresting information in our region. People pay taxes and they don't care. People either think that this is very private information and there is nothing to dig there or they are really not interested. 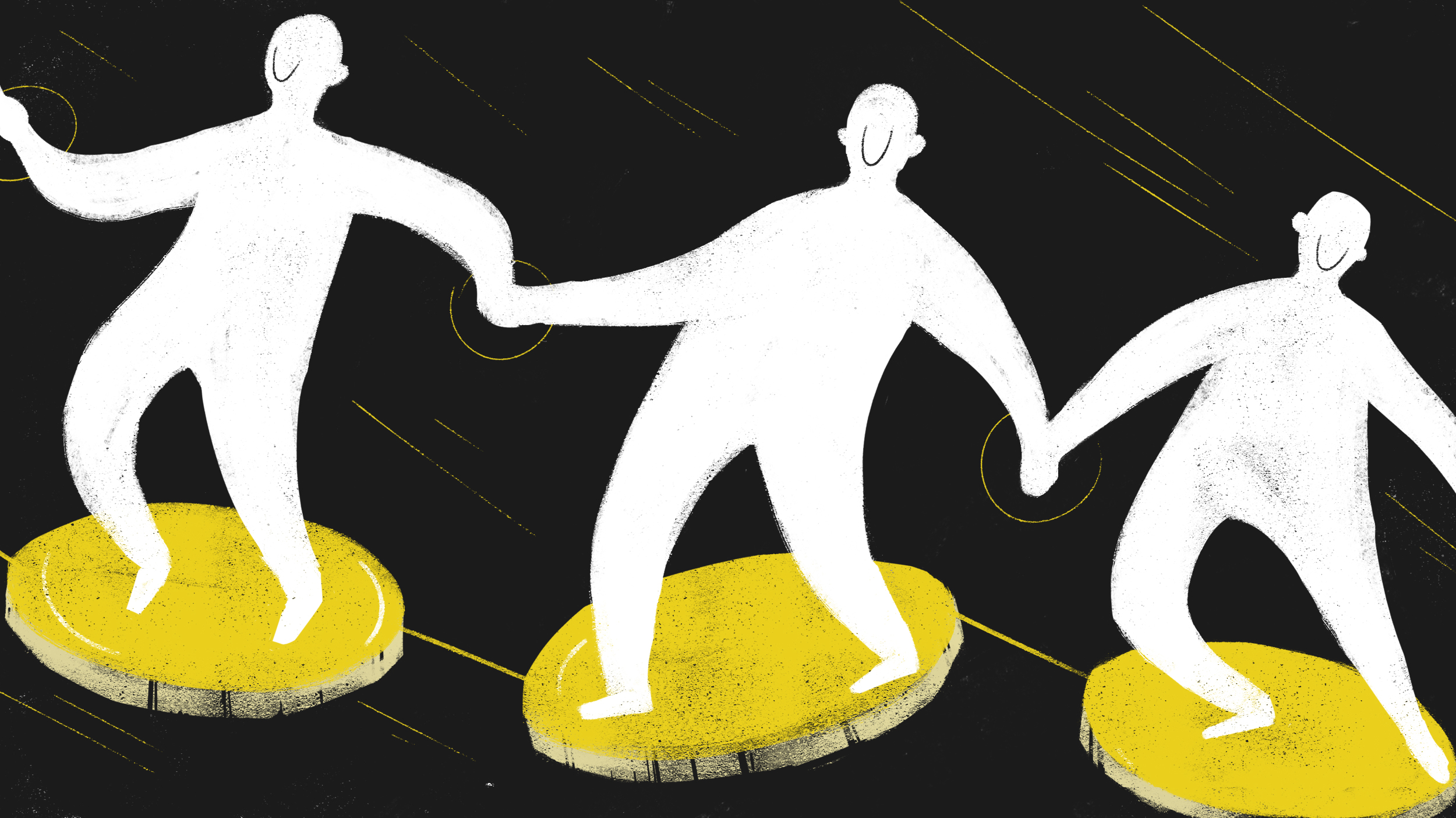 Kazakhstani lawyers unearthed important data. More money is spent on the government financing of the media than on the aid to cancer patients or on the development of schools and kindergartens. In Kazakhstan, there is a stupid allocation of budgets. Astana is all in gold, in backlights, while in the villages, there is no tap water. So activists decided to focus on that. We were thinking for a long time how to show this to the public, how to approach the audience so that it would sting them to the quick. It is clear that state-owned media in Kazakhstan is propaganda. Roughly speaking, Kazakhstan President Nursultan Nazarbayev spends 140 million dollars a year on propaganda. At the same time, all these channels have a very low rating. That is, a huge amount of money is spent on Khabar-TV [the Kazakhstan television channel, which is a part of the Khabar Agency], which no one watches and no one respects. Still, it was difficult to think up how to bring this to people in a proper way.

We came up with an imaginary country Khabarstan. The title contains a word-play. “Khabar” in translation from Kazakh means message. And in Ukrainian and Belarusian languages this means bribe. We made a page on the web, on social networks posted real news, what was built for the money of taxpayers. In the end, it turned out to be a successful campaign and people are still discussing it. It was written about “Khabarstan” in the local Esquire. It seems to me that we have hooked up just the right audience – thinking young taxpayers who want to participate in the life of the country. They have responded to this idea.

One of my latest projects is an animation “22 tries” in collaboration with the Dutch animators. It was the idea of a guy from the Netherlands who, like me, decided that he didn’t want to be a commercial animator any longer and that he wanted to do something for the society. He liked Belarus very much. So he received funding from the embassy of Netherlands for the project aimed to tell people what NGOs are doing in different countries. Most people in Belarus don’t understand what NGOs are and what they do. In the embassy, he was given a list of NGOs that operate in Belarus. We have chosen human right defenders NGO Human Constanta and their volunteer assistance-to-refugees mission in Brest. They consulted us a lot; we went to Brest, met Chechen refugees and volunteers on location. We didn’t want to make another stereotypical pathetic story about refugees.

The animation is about a crisis on the Belarusian-Polish border started in 2016, when Poland suddenly refused to accept asylum seekers. More than 3,000 people were stuck in Belarusian Brest, without the opportunity to come back home. They flee from the North Caucasus regions because of persecution, threats, blood feuds and tortures. Human right defenders NGO Human Constanta started a volunteer mission to help refugees in Brest in 2016. They help foreign citizens to protect their rights in Belarus.

– Why in your opinion it’s necessary to resort to means of visual communication while talking about such things?

– Since the whole audience is actively on social networks, it will not be possible to get anybody interested in any topic if there is no visual hook. People now have quick mosaic thinking. Ideally, they want to see some kind of print and understand everything. Therefore, any initiative should use the methods of advertising and marketing. People have adapted to receive information in that way. We need to use these channels and tools.

– What can you advise to those organizations or projects that don’t have a budget for such tools?

– Any initiative thinks that its subject is very important and interesting. But it is not. As a rule, no one at all is interested in anything, no matter how essential the subject is. This is the first thing to realize. If someone made repost on a Facebook, it's already a good job. It is always necessary to seek for some unusual methods. I'm sure that you can make something attractive without raising incredible resources for web development or recruiting big names. You can act in social networks without money at all!

And yet at workshops for activists, I encourage them to always put in a grant application some budget for the visuals, for the design support. Who will do the website? Who will draw pictures for social networks? In Belarusian media, for example, there is quite a high artistic standard of visual materials; the audience already got used to certain quality. So this is very important.

– And yet, what tools can be used when the budget is limited?

– Well, I believe that you have to pay for the work to everyone. Still, there is always such a resource as young artists, who can do everything voluntary or for the hype. You can run a competition for young people and let them draw something for you. Designers who nested in the commercial sector often go for some social projects pro-bono. The main thing is to somehow attract them. Websites too can be made for free; there are a lot of free templates. The stickers in the Telegram are also free. 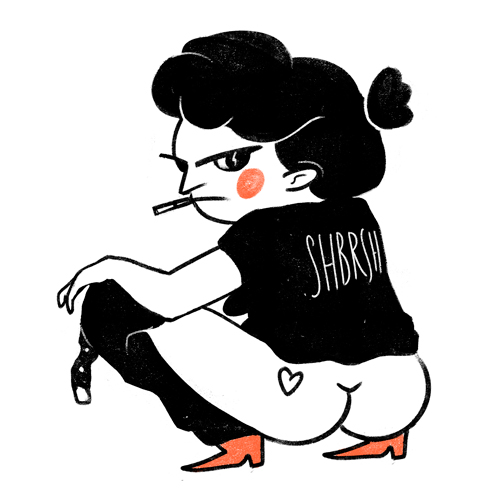 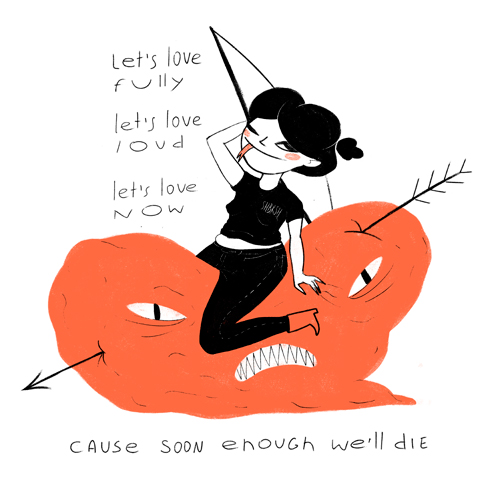 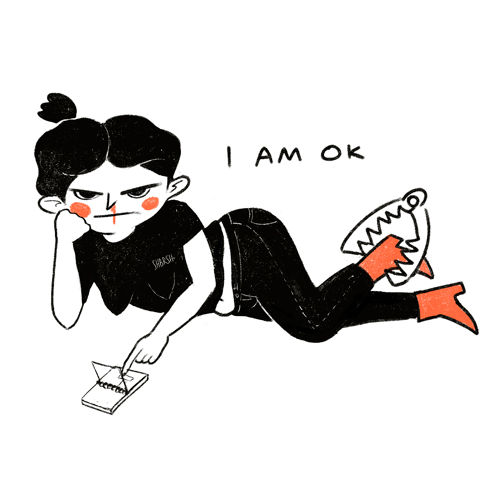 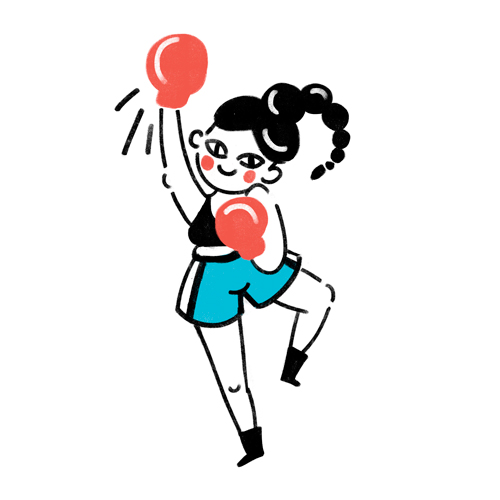 – If you cooperate with young artists not all of them can be familiar with the matter and understand the subject of the project. Is it important for the artist working with NGOs to know their subject at all?

– It is important that the activist or the NGO member and the designer work together. If the organization itself clearly understands what they want – it's generally perfect. Say, we want to print hundred of stickers with specific image by the end of summer. The most difficult task is to make “something cool”.

– Still, how important is it for the artist to be involved in the human rights movement?

– It seems to me that it is enough to have at least an interest. Activists will tell you what's what. The designer who responds to your call already has a desire to make sense of the subject. I communicate with young people in Minsk and see a lot of enthusiastic artists among them.

As for me personally, I always read and learn. It is impossible to know everything at once. But it's not a problem. The parallel project at my residence was related to the topic of domestic violence. And the activist from the Russian center “Sisters” very clearly limited the artist: “We can not use any visual image in the video because it can trigger someone. No cries for help, nothing like that.” Of course, sometimes you can meet activists who don’t know their own subject. Or they know it but in terms of visualization they don’t catch on. NGOs can stand for something but don’t know how to show it.

– We must think about all the options. What will this story look like? Who is the audience? Will they get it? How not to offend anyone? For me, it’s important to be humorous and straightforward in my illustrations though often it’s not possible. But you can always find a way with the help of metaphors. We need to think things through at the stage of the idea. For example, the illustrations should have gender balance; a person with a disability should be present there, etc.

– How to set a design task properly?

– It would be good if the organization itself would search for some references that have already been done on this topic and show them to the illustrator. For example, you like that the topic of AIDS is visualized not through the prostitution but through the hospital. Or some images that do not fit your subject at all should be indicated: no tears, no pity. The main thing is to be in touch with the artist. I, firstly, do some sketches that are only clear to me and start to draw something only after my client approves them. Often it depends on the client if they trust you or not. 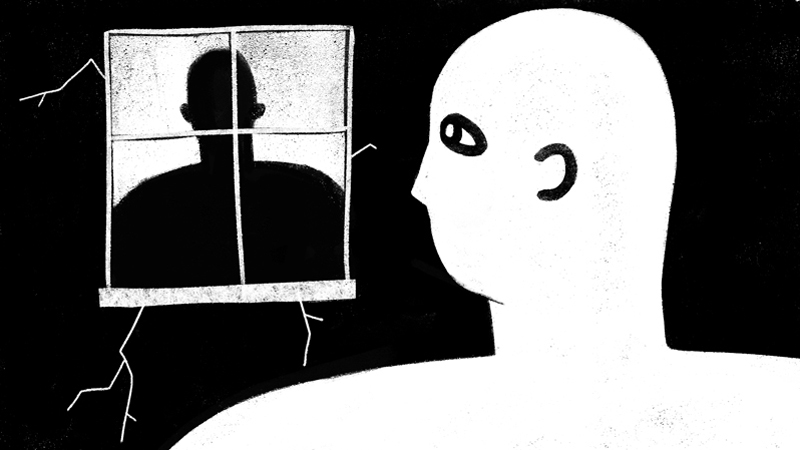 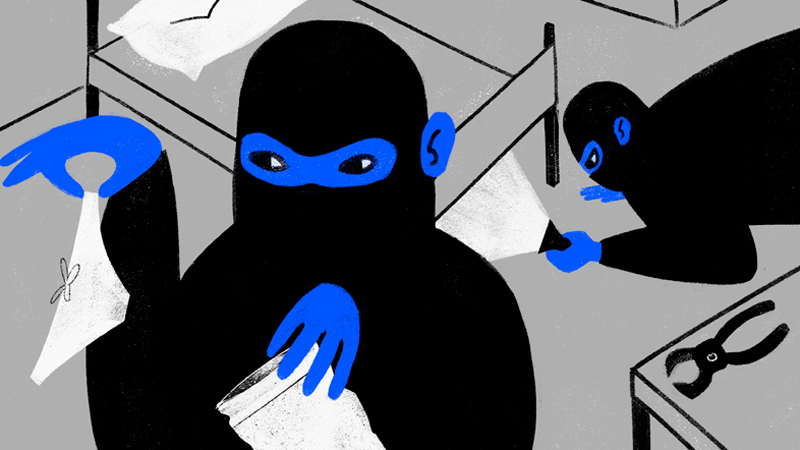 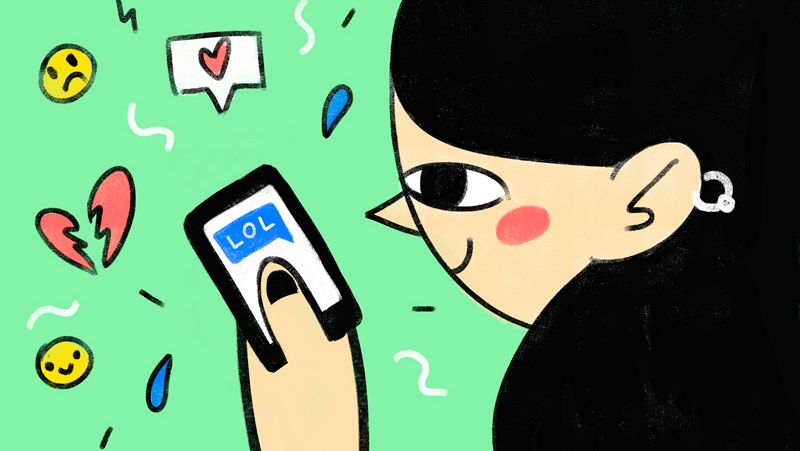 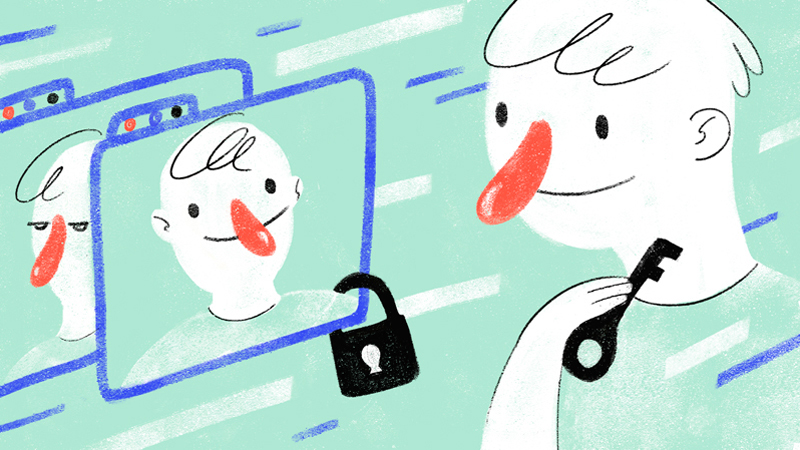 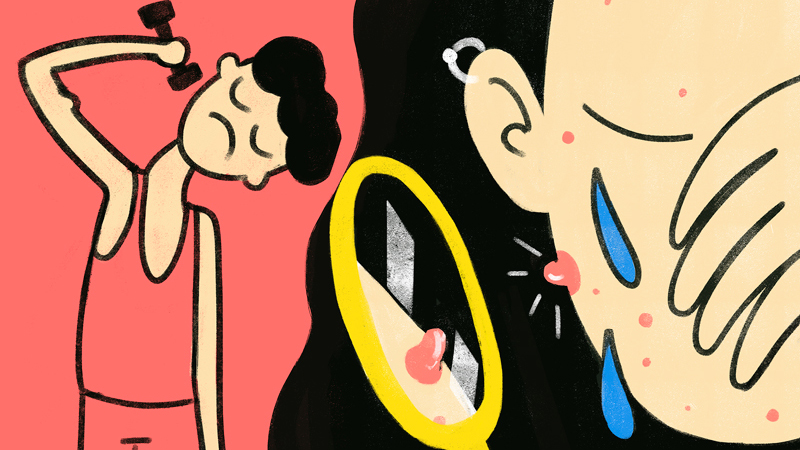 – How to visualize complicated stories?

– For me, the first tool is humour. Although there are such topics as domestic violence which you cannot make fun of. It is difficult to imagine how you can joke about it. But in general, most of the topics can be reached through humour: from ecology to corruption. Kiev media Zaborona has a series of funny stickers about feminism.

For me, illustration is such a convenient tool that really helps when you cannot show something through a photo or video. Serious subjects work well through video or photos. A good documentary about refugees will work better than artistic animation. But sometimes you cannot film or photograph anything or the character doesn’t give a permission to shoot, or you are not able to travel anywhere. Then the illustration or animation is an option. I really like the project “Zhili-Byli” by the online magazine Takie dela, where they were telling stories of homeless people who have already died.

What August wanted you to know